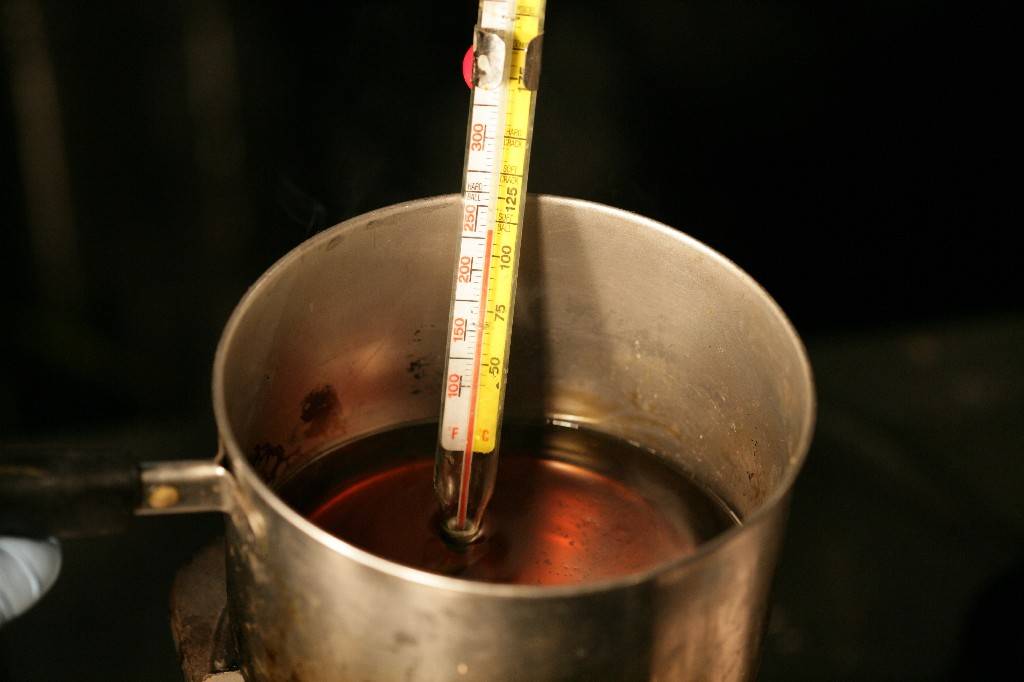 All restaurant oil is not created equal, and there’s quite a bit of extraneous ‘stuff’ in it- water gets into hot oil from the cooking process, and the oil itself breaks down after a lot of use and becomes ‘free fatty acid’, which interferes with our reaction. And, no, the water doesn’t just boil out while the fryer is in use (even though a fryer is running much hotter than the boiling point of water)- food particles and other conditions help hold water in the restaurant oil, so we get stuck with it along with all that great free oil when they give it to us for biodiesel use. Generally, oil that is changed frequently won’t have as much water or free fatty acids as oil that’s heavily used. Also, of course, rainwater can get into a restaurant grease barrel, but that’ generally sinks to the bottom quite quickly and is easy to settle out. We have two tests we perform- titration to test for free fatty acid, and a not-very-scientific ‘sputter’ test for water.

We can test for the water content in a very simple way- just heat a small sample (a quarter cup or so) in a small pot, and see if it sputters or bubbles when it reaches the boiling point of water (100C, 212F). You can do this on your kitchen stove but I like to have a hot plate or propane camp stove in the shop for this purpose. Straignt Vegetable Oil conversion guru Dana Linscott uses a propane plumbers’ torch and a small kitchen ladle to test his oil.

You’ll eventually learn how much of a difference there is between oils. If you find one that does not sputter at all, that’s probably the ‘best’ oil out of your options. It’s best to learn the difference by collecting a few samples from different restaurants and testing them all to see what the variation is. Also, use a thermometer, and don’t worry about when exactly the bubbling starts- it’ll depend entirely on the size of your sample or the shape of your pot. IF there’s boiling at 212F/100C, you’ve got water. How much you think it is, is up to you to judge unfortunately. 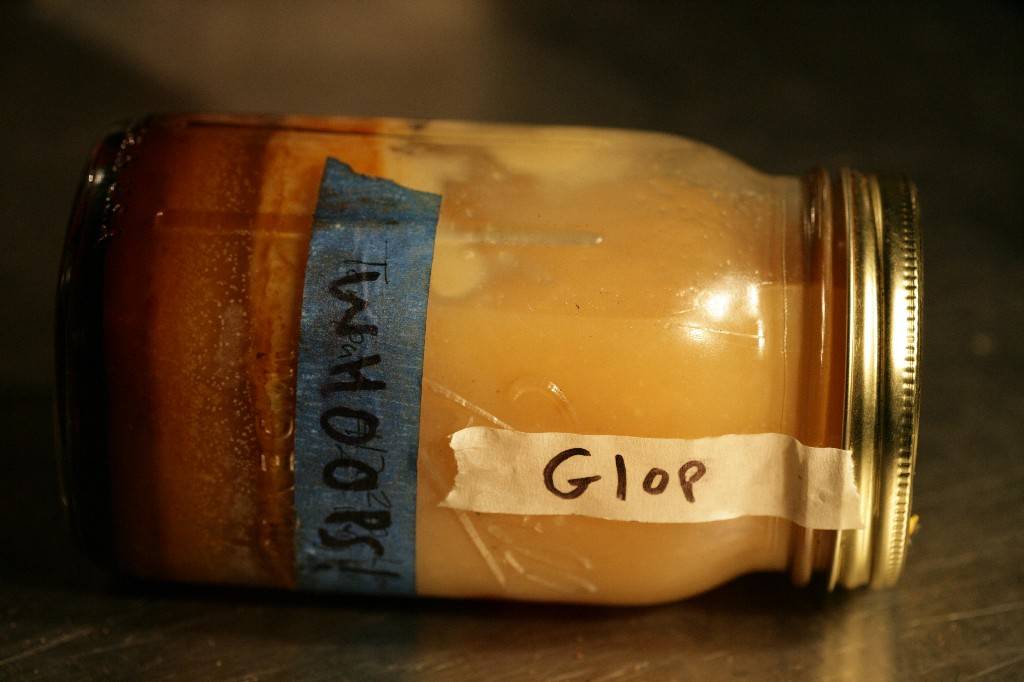 Water in oil can cause you to make more ‘soap’ than if you used dry oil.

Sometimes that soap can actually gel up all of your biodiesel and prevent you from separating glycerol, especially if you’re using NaOH rather than KOH. generally KOH won’t do this.

Above is a photo of what could have been biodiesel.

However, soap can cause problems even if two clear layers of real biodiesel form, rather than the traumatic incident at the left. The two biggest problems with soap formation are trouble washing the fuel (the formation of emulsion, which is almost as traumatic as glop), and gelling up or coating of filters for those using unwashed fuel. Like everything in biodiesel, there’s more than one cause, but high water content in the oil is one of the causes of soap.

To dry the oil, you can boil the water away at 250F or so until it stops boiling, or you can just use it to make biodiesel and hope for the best- you’ll find that wet oil that’s low in ‘free fatty acids (see titration page) is fairly forgiving of water content, but it’s best not to have any significant water anyway. Boiling the oil to get rid of water takes a long time and is nearly impossible in a full-size processor using 120V electric elements (quite a bit easier in a high-powered 240V heater)

An better way to deal with water than outright boiling, is to heat the oil to about 60C/140F- at that temperature the water is heavier than the oil- let it settle overnight, then dont’ use the bottom tenth or so, where the water is likely to be.

-This works much better if the oil is prefiltered because the food particles tend to hold the water suspended in the oil. (usually biodiesel makers don’t really filter their oil before making fuel from it)

-This really requires insulation- you could keep heating all night but convection currents might keep the water from settling. Thick insulation (I use bubblewrap from retail gift store dumpsters, you could also use fiberglass water heater blankets or cardboard) really helps retain the heat if you’re heating in a barrel, water heater, or similar appliance.

-Hydrogenated oil or fats that are solid at room temperature- tropical oils or animal fats- are too thick to let the water drop out unless you insulate the tank.

Generally watery oil is also higher in free fatty acids though that’s not always the case (ie if rain is the cause of the water there might not be a FFA problem). Rainwater that gets into restaurant oil barrels tends to settle more easily than water content from food fryers.