In making Biodiesel we work with some dangerous chemicals. Methanol, Caustic Soda, Caustic Potash, and methoxide are the chemicals in question. All of these chemicals have been around a very long time and safety procedures have been developed that make working with them safer.

The Appleseed if properly installed and used is the safest way to make homebrew biodiesel. There are a number of other designs in use, but most will eventually develop leaks that can not be stopped or allow methanol to vent directly in the brewers face. The Appleseed is a good design and I highly recommend it.

The most dangerous part of making biodiesel is from the time the methanol is purchased to the time the methoxide is completely introduced into the oil. This is when the majority of the accidents have happened. This is the time to be safety focused more than at any other time.

The safest way to deal with methanol is to only purchase exactly what you need to make your batch. The National Fire Safety Code limits the amount of methanol you can store at a residential location to two five gallon containers. It is just not safe to store methanol in any quantity at your home. More than one house has burned down over the years because someone stored a 55 gallon drum of methanol at their home. If you must buy more, then buy for two batches storing the extra two – 5gallon gasoline rated containers in a metal fireproof cabinet, preferably outside in a shady place.

Many people have do not have access to less than 55 gallon quantities. Try to form a buyer’s club to purchase and divide up the methanol into smaller safer quantities. A buyers club can help reduce costs for the club and make brewing safer.

When you’re ready to mix your methoxide, be sure to wear a dust mask to keep caustic dust particles out of your lungs. Wear chemical rated splash proof goggles to keep everything out of your eyes, and wear an apron and gloves. There is no respirator that will stop methanol fumes and no gloves that will not let methanol seep through. If you splash methanol on the apron or your gloves, remove and replace them right away! If you splash methoxide or caustic on your skin then douse it with vinegar and wash with water. A full face shield may be clumsy, but it will keep any methanol or methoxide from spraying on your face.

Once the methoxide is mixed, keep the carboy at or below the beltline (and above the check valve). If it’s kept low to the ground it’s less likely to spill or spray on your upper body (face). Squeezing the carboy while lifting it to a high position has caused methoxide to spray in at least one homebrewers face. When mixing the methoxide in the oil, you must have an open vent to let the air out of the tank. This air contains methanol fumes. A properly constructed Appleseed will be vented to the outside away from your workspace. One modification that improves safety is the reflux condenser, which condenses any methanol fumes and dumps them back into the tank. Another modification is a tube that connects the methoxide carboy to the tank vent. Neither of these are replacements for the vent tube to the outside. Under certain conditions the methanol will violently boil as it is mixed into the oil and overwhelm both the reflux condenser and the carboy and spray methanol fumes in your workspace if you do not have the vent run to the outside. In at least one case, a fire resulted when an open top processor experienced this violent boiling.

Bubble washing the biodiesel can cause methanol vapors to be released into your workspace. Mist washing for the first few washes can reduce the methanol fumes some. Better to wash biodiesel outside in a drum on wheels, then roll it inside with a lid on it to settle between washes. Washing will completely remove the methanol either into the air or into your wash water, where it can be processed for disposal.

Another potentially dangerous situation is the storage of the byproduct. The byproduct is laden with methanol. Pour it into 5 gallon buckets or cubes, leaving no air gaps at the top and dispose of it at a landfill. Most homebrewers want to stockpile the raw glycerine due to an uncertanty of how to dispose of it. Stockpiling raw glycerin is a fire hazzard and can be leached into the soil as the containers it’s stored in start to leak. The only known biodiesel death was caused by a man grinding on a tank that was partially filled with methanol laden byproduct.

Do NOT use blenders to make test batches or to mix methoxide. Most blenders will eventually leak oil and methanol down onto the spark filled motor. I have heard story after story of blenders catching on fire. Use the Dr Pepper method instead.

Finally, badly designed or poorly maintained equipment can also cause safety issues. Plumbing that drips oil is also leaking methanol vapors into your workspace. Methanol vapors can catch fire without any visible flames. Vent tubes need to be kept clear of obstruction and kinks that prevent them from operating as vents. Make sure your thermostats are working properly and your oil is not overheating. A check valve on the methoxide feed will prevent oil from going into the methoxide carboy. If oil is going into the methoxide carboy then methanol fumes are exiting the carboy into your workspace. 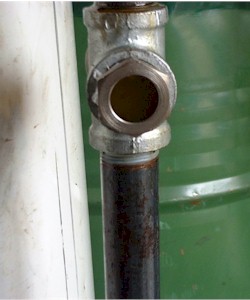 Over time the vinyl reinforced tubing used as a pump return line will be degraded by biodiesel and methanol. It will initially craze making it hard to see the oil. If it is not replaced it will develop an aneurism and blow out spilling oil and methanol everywhere. The design has this week link left in for the beginner to learn how biodiesel looks when mixing with methoxide. Once a homebrewer has gained experience making bio and gets the feel right for how to set the valves for mixing, the vinyl return line off the pump should be replaced with steel pipe and sight glass. This should be done before the vinyl tube degrades to the point of failure.

If you follow these simple safety rules, you will avoid most of the fires and injuries that some of your predecessors have experienced in developing homebrew biodiesel.

The finished product biodiesel is not a hazardous or flammable substance. It can be stored safely in either 55 gallon drums or 275 gallon pallet mounted totes. Now you have been educated on the safe way to make biodiesel, go forth and brew safely!