This is a ridiculously crude ‘scale’ that you can build to get started making small batches of biodiesel. The focus should be on ‘crude’. I invented this one day at a campout where a friend and I had wanted to demonstrate a liter batch of biodiesel to interested people, but had forgotten our scale.

The scale is made by using a needle and thread to attach cups to the ends of a straw ( you may need to use some tape on the ‘beam’ to make it balance evenly) and I balance it by dangling it from a thread in the middle, or by pinning it with a straight pin in the middle (like the one above). I use two sets of cups- a ‘basket’ and a ‘liner’ inside each basket. 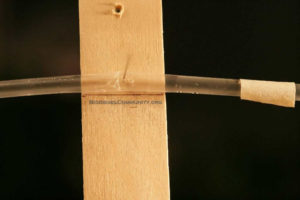 Read the scale by matching the straw ‘beam’ to a level line. You may want to draw the line above the ‘beam’ for better readability than shown in the photo.Also, it is not entirely obvious from the photo, but the beam is pinned to the stick (a table edge works well) with a straight pin, and I had to hollow out a bigger pin hole in the straw to keep the ‘beam’ swinging smoothly.

It works on the principle that distilled water weighs 1 gram per mililiter, so you can balance a certain amount of water with the same amount (in weight) in lye in the other cup. 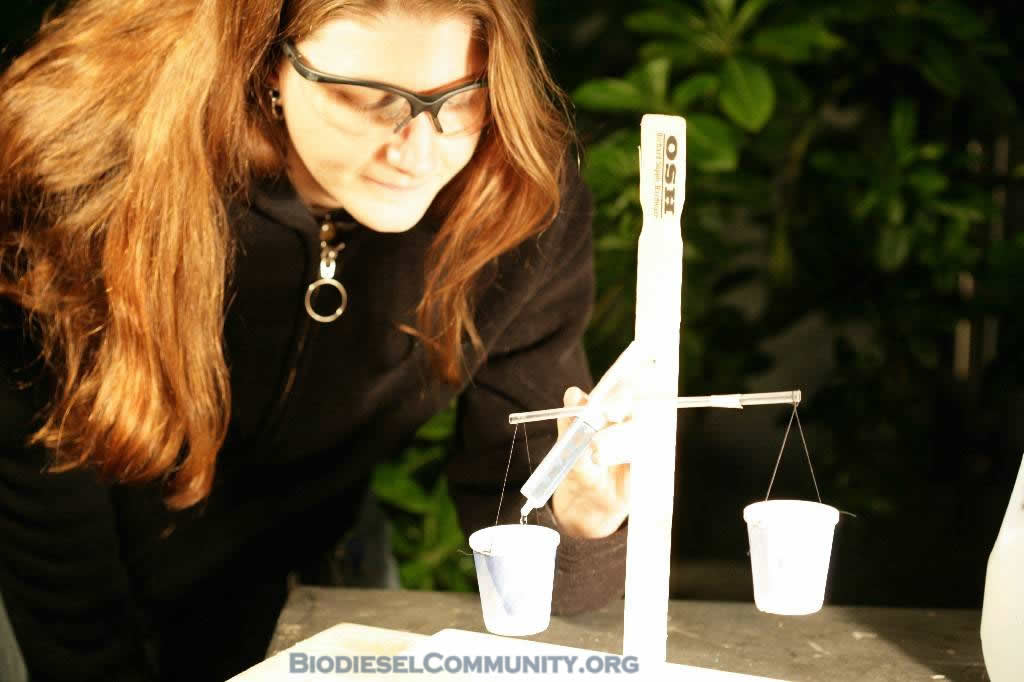 Put a desired number of mililiters of water in one cupof the scale,

and then measure the lye into the cup on the other side of the scale until it balances the weight of the water. Generally homebrewers already use syringes or pipettes or eyedroppers to measure mililiters for titration, so you may have the equipment to measure ml anyway to make this improvised scale work. Of course the quicker you find a decent triple-beam scale (try eBay), the quicker you’ll be doing good measurements.

Another principle to keep in mind when dealing with crude measuring devices is that you can make them more ‘accurate’ by measuring larger amounts of chemicals at a time- the scale gains a better ‘resolution’ when you’re only dealing with 3 or 4 grams of something than trying to be accurate with 1 gram for instance.

So for example, for basic titration, you’d ordinarily measure 1 gram of lye to add to a liter of water for your reference tester solution- which could also be done on the crude dixiecup scale by measuring 3 grams of lye at once, and adding it to 3 liters of water. There are several variations on this same theme.